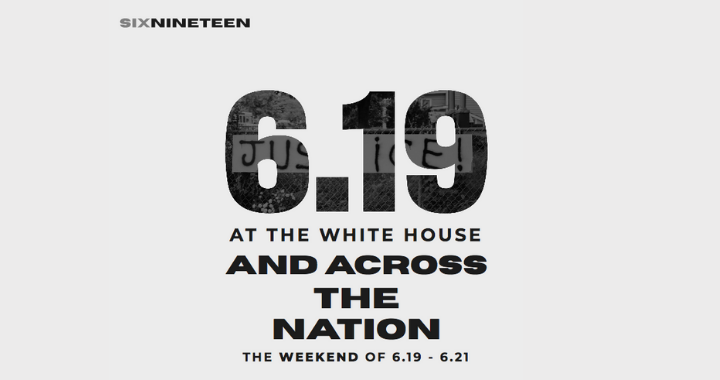 Following weeks of non-stop protests in all 50 states, the Movement for Black Lives (M4BL) is calling for a weekend of actions June 19-21 to honor the legacy of Juneteenth. Hundreds of events are planned across the country, and the NLG is coordinating with M4BL and Law for Black Lives (L4BL) to provide legal support along with local jail support groups, bail funds, and legal collectives.

Juneteenth commemorates the emancipation of enslaved people in the United States, and this year will build on ongoing mass mobilizations against racial injustice and police brutality against Black people. As the SixNineteen website describes: “Juneteenth is a day that honors Black freedom and Black resistance, and centers Black people’s unique contribution to the struggle for justice in the U.S. This Juneteenth is a rare moment for our communities to proclaim in one voice that Black Lives Matter, and that we won’t tolerate anything less than justice for all our people.”

The NLG affirms our full support for the demands of the Movement for Black Lives:

The NLG is taking our lead from local and national Black-led organizations to help fight for an end to the criminalization and murder of Black people. The past few weeks of demonstrations nationwide have led to many violent police attacks on protesters, enactment of legally questionable curfews, deployment of the National Guard, and over 10,000 arrests (although most charges were dropped almost immediately). Therefore, the NLG and L4BL are preparing to support Juneteenth actions through legal observing, jail support, legal hotlines, and legal representation when possible. Furthermore, the NLG board has unanimously voted to celebrate Juneteenth as an official holiday and will be closed on the 19th.

“This Juneteenth will be a historic moment of reckoning for our country’s legacy of slavery, colonialism, and genocide. The NLG is proud to work in solidarity with M4BL and L4BL as people rise up to insist that all Black lives matter,” said NLG Executive Director Pooja Gehi.

Find a Juneteenth action near you at the SixNineteen website, and we’ll see you in the streets.

The National Lawyers Guild, whose membership includes lawyers, legal workers, jailhouse lawyers, and law students, was formed in 1937 as the United States’ first racially-integrated bar association to advocate for the protection of constitutional, human and civil rights.